This December, Karsten Meyer zu Selhausen received the Eurobits Excellence Award 2019 for his master's thesis "Security of PDF Signatures" [1]. Since 2017, eurobits e.V. – as the center for excellence within the IT security field located in Bochum – annually honors a thesis of a graduated student within the field of IT security for its scientific contribution and high relevance for IT security in practice.

Our IT security consultant Karsten was among the first to investigate the security of digital signatures applied to PDF files. The results of his master's thesis provided the basis for the paper "1 Trillion Dollar Refund – How To Spoof PDF Signatures" published at CCS '19 [2] and helped to increase the security of the affected applications.

Hackmanit congratulates Karsten on winning the award and is happy that he is part of the team.

In the following, a short overview of the results of his master's thesis is given.

Since version 1.3 the PDF standard allows to add digital signatures directly to PDF files to prevent modifications without the recipient noticing. The protection provided by a digital signature is especially important in crucial environments which rely on PDF files - including the judicial system, tax matters and all sorts of legally binding contracts.

The way a signature contained in a PDF file is displayed to the user strongly depends on the application used to view the PDF file. Some applications, such as web browsers, do not support PDF signatures at all and therefore do not indicate their validity or presence to the user. Other applications might display a banner above the document's contents or a panel stating information about the signature including its author and its validity.

One popular example of signed PDF files are the invoices for purchases at Amazon. Figure 1 shows that Adobe Acrobat Reader DC recognizes the signature in an Amazon invoice and states that it is valid and the document was not altered after the application of the signature. 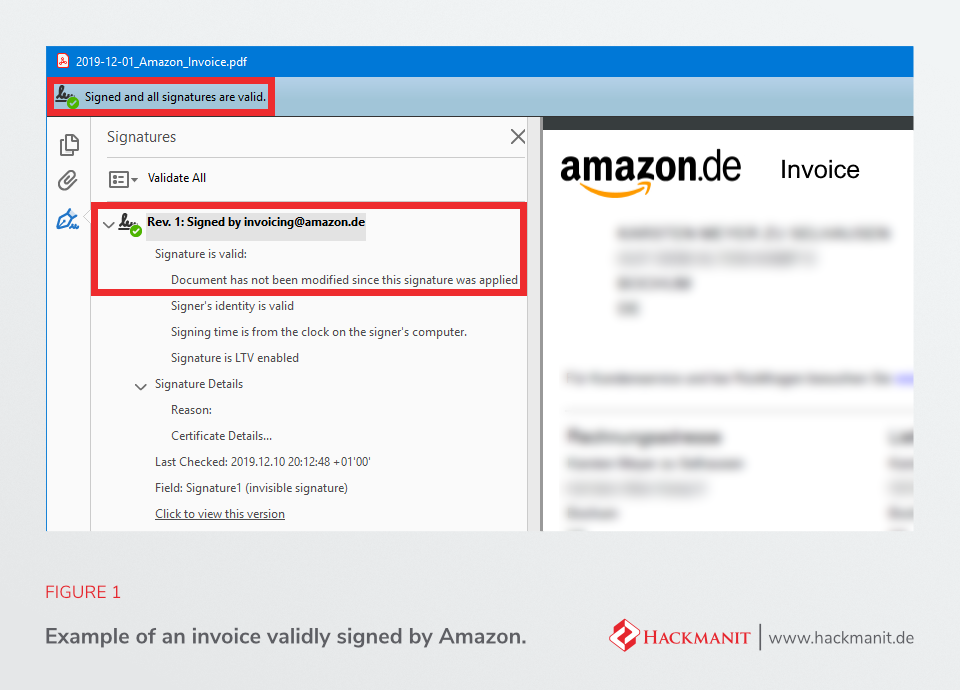 The attacks created during the master's thesis are divided into three different attack classes:

The evaluation included 34 desktop applications for Windows, macOS and Linux. All applications which could be evaluated were vulnerable to at least one attack class - except one application: Adobe Acrobat 9 for Linux. Released in 2013, version 9.5.5 is the last version of Adobe Reader developed for Linux and was only added to the evaluation as a reference. It is vulnerable to multiple other attacks and therefore must not be used outside of test environments.

The identified vulnerabilities allowed to bypass the integrity and authenticity protection of PDF signatures completely and to change the displayed content of signed documents arbitrarily. Figure 2 shows an example of a successful attack inspired by the paper "1 Trillion Dollar Refund – How To Spoof PDF Signatures" by Vladislav Mladenov. The displayed content of the document has been manipulated and shows a refund of one trillion US Dollar instead of an invoice for a purchase. Nevertheless, Adobe Acrobat Reader DC states the document is validly signed by Amazon and the document was not altered after the application of the signature. 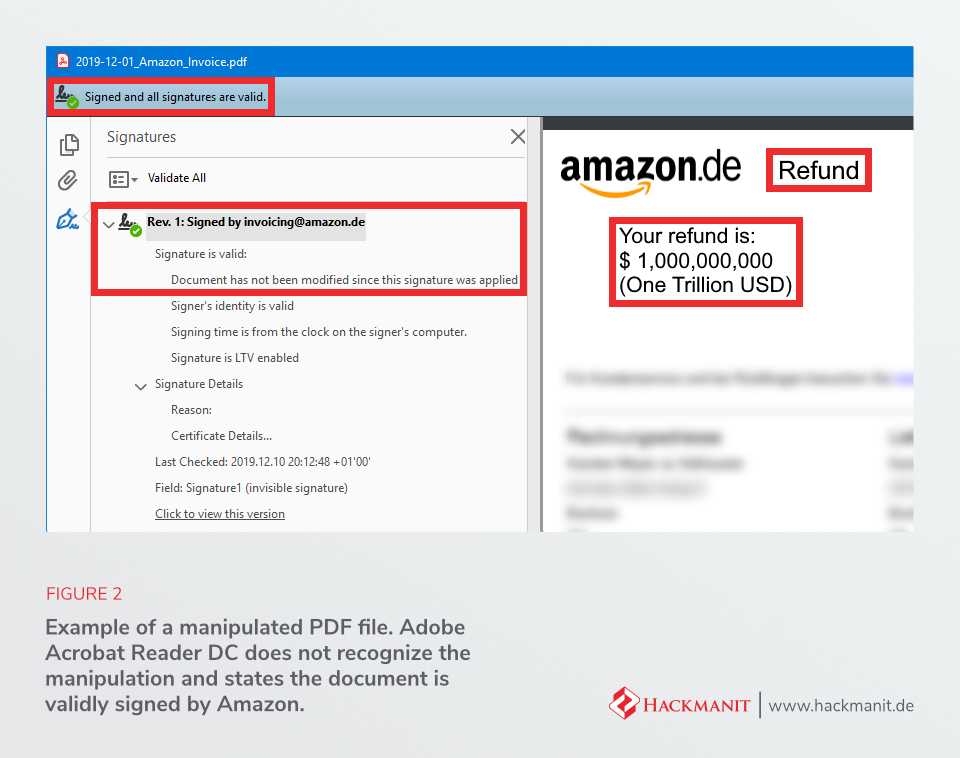 The results of the evaluation show that it was - and still is - necessary to survey the security of PDF signatures to ensure they fulfill their purpose of protecting the document's contents. The mere amount of vulnerable applications emphasizes that the applications' vendors need to pay more attention to security aspects during the signature validation and probably when processing PDF documents in general. The overall weak security of PDF signatures in common PDF processing applications is especially alarming as governmental institutions as well as private companies rely on the protection provided by digital signatures in PDF documents in various environments including the judicial system, tax matters and all sorts of legally binding contracts.

If you want to ensure that your application or company uses PDF files in a secure way, contact us.