In our blog, you will find articles on various IT security related topics, such as open penetration tests, public threat analyses, and analyses of other interesting topics.

In September, we* published our new attack called Raccoon. Raccoon is a timing vulnerability that affects all TLS specifications up to 1.2. It allows attackers under certain conditions to break the encryption and read sensitive communication, for example, HTTP traffic or emails. Luckily, the vulnerability is really hard to exploit and relies on very precise timing measurements and on a specific server configuration to be exploitable.

The attack targets the Diffie-Hellman (DH) key exchange which is a well-established method for exchanging keys in every communication protocol, including TLS. When using Diffie-Hellman, both TLS peers generate private keys at random (a and b) and compute their public keys: ga mod p and gb mod p. These public keys are sent in the TLS KeyExchange messages. Once the public keys are exchanged, both the client and server can compute a shared key gab mod p - called premaster secret - which is used to derive all TLS session keys with a specific key derivation function.

Figure 1: Overview of the Raccoon attack.

The DH key exchange is a widely used technique to exchange shared keys. Therefore, one would think that this attack affects many TLS servers. Luckily, this is not the case because the attack relies on the fact that the connection is established with a cipher suite using DH over finite fields and the server repeats DH public keys. This was indeed quite typical about >5 years ago. However, nowadays most of the connections use a DH key exchange over elliptic curves. Even if a DH key exchange over finite fields is used, the server typically uses fresh ephemeral public keys.

The DH handshake over elliptic curves is preferred because of its performance and security advantages. For example, Firefox 78 was the last major browser which decided to remove DH over finite fields.

Ok, So Is There Nothing That I Should Do as a TLS Admin?

There is one minor exception regarding the attack impact; if you are using an F5 appliance vulnerable to this attack (CVE-2020-5929), you should update your server or your configuration. The reason is that a specific bug in this appliance reveals the first premaster secret zero byte without complex timing measurements. The DH public values are repeated per default. This makes the attack much stronger. See F5 Security Advisory.

If you are using an up-to-date server, your configuration should be secure. If you want to be sure, you can also use our freshly-released TLS-Scanner to evaluate your server. Get the latest version of TLS-Scanner here.

Our tool evaluates whether the server is vulnerable to a direct raccoon attack (such as F5) and whether it repeats DH keys. An example output can be seen in Figure 2. 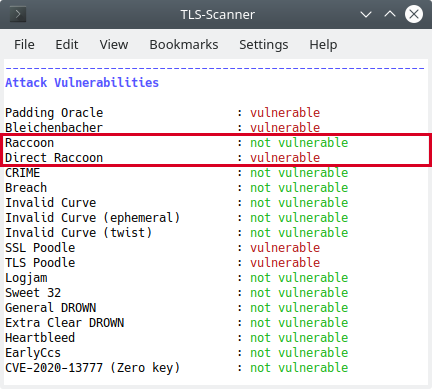 So Why Is the Attack Interesting at All?

Raccoon is a new cryptographic attack showing for the first time how to practically apply a Hidden Number Problem solver on a Diffie Hellman key exchange. We believe that our attack will be extended in the future in the following ways (see also my Twitter feed here):

Our attack was already included for consideration in the RFC draft for Hybrid key exchange in TLS 1.3: https://tools.ietf.org/html/draft-ietf-tls-hybrid-design-01#ref-RACCOON

If you want to learn more about attacks or the security of PKCE, OAuth, OpenID Connect, and other Single Sign-On solutions, you can also book one of our in-depth Single Sign-On training courses.